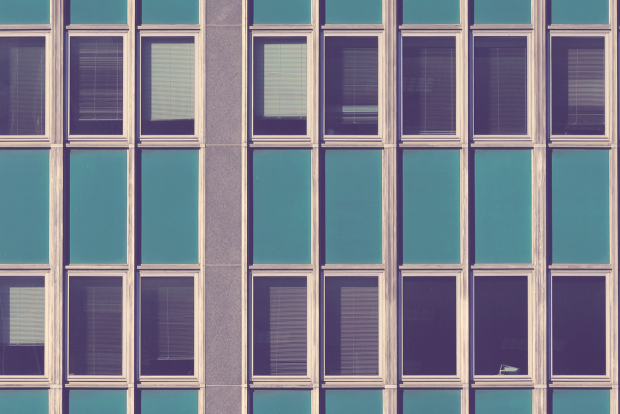 If you knew then what you know now, how would you go about finding fulfilling work and ensuring success in your career?

Choosing the right career path was no trivial matter for Harvard Business School's Class of 1963. They were members of one of the last generations that considered a lifelong career with a company as nothing out of the ordinary.

That’s a stark contrast to the results of a 35-year study conducted by Chuck Pierret, an economist with the U.S. Bureau of Labor Statistics. His report, released in 2010, found that the average American entering the workforce in 1979 held nearly 11 different jobs by the time she was 42 years old.

So the stakes were much higher when those Harvard grads hit the bricks. They needed to find a job they could live with for a very long time. And a few of them learned, in retrospect, that what they thought would be a rewarding career sometimes turned out to be a mismatch for their true passions.

Today there is clearly less pressure to get it right the first time.  But the advice of the Class of 1963 still has merit for those who’d rather not flounder or waste precious time on a less-than-thoughtful career choice. Do not consult us, they collectively say. "Listen to your heart."

If you see yourself as an entrepreneur, start your company as soon as you possibly can. If you know the field you want to work in but aren’t sure about your business plan, go to work for a company that you admire in the same type of business you want to create. If you go this route, do not be concerned about compensation. Get all the knowledge you need to launch your own firm.

Choose work you enjoy and that serves as many people as possible. Focus on serving others — not on building wealth. Serve well, and money will follow.

Have the discipline to limit work hours.

Work and pleasure are not synonymous, but they’re not opposites, either. Loving what you’re doing (well) can be infectious and motivating to others. Ultimately, that’s leadership.

Work is not always fulfilling. That is why we call it work. But if, at the end of a year or five years, you can identify concrete examples of changes you have made that have improved your company or the careers of your employees, I think that is fulfilling.

In the middle 1950s, when I graduated from high school, the United States was producing 50 percent of the world’s GNP. It was the world’s factory for sophisticated goods — autos, trucks, farm machinery, appliances, railroad equipment, machine tools, and industrial equipment of all kinds. General Motors, Ford, and Chrysler were world giants. Most of the factories were in the “industrial heartland” of the country, including my home state of Ohio. I went to the Harvard Business School thinking I wanted to be an executive in a manufacturing company.

After 10 years of slogging, I left manufacturing for an agribusiness and natural resources company. Being repotted was a success. I enjoyed being the CEO and building the new company.

In hindsight, I realize the lack of real opportunity in my early career was not due to any mistakes I made or to company politics. It was because the opportunities in a declining industry are so constrained, especially compared to an industry that is growing rapidly. With declining growth, companies and their executives become defensive. They do not take risks, and they focus on preserving the status quo.

You have the talent and capability to create a great life for yourself and for our society. The opportunities are numerous. The need for leadership is compelling. You live only once, and life is short. So your choices matter greatly.

Don’t waste your chance to make important contributions. Work on important opportunities and problems. Be an ethical exemplar and committed leader. Become a recognized expert in your chosen profession. Reach out to and concentrate your time with the best people in your profession. Avoid those who are OK or less on values, character, and ethics.

Choose a career you really enjoy. You’ll make ample money doing work you like with people you admire. You’ll be able to provide your family with everything of real value, so why give up joy for dough?

Find a firm that understands the real value of good ethics.

You may consider starting your own company, ideally with one or more friends you trust and admire. If anyone can talk you out of it, let them — because it’s only when you know you must do it that you’ll have the determination to overcome all the obstacles and challenges and have the persistence to figure it out and make it fly.

If you decide to go ahead, give it all you’ve got. Building your own company is the greatest freedom you can ever have — and it’s fun!

Work hard.
Be honest.
Help others. 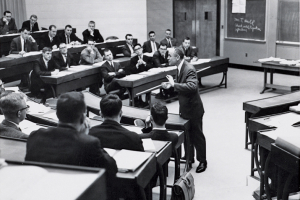 Professor Charles M.Williams, a former Harvard MBA student himself, is seen here teaching his signature class, Management of Financial Institutions, one of the most popular second-year electives at HBS.

Put up with boring, soul-destroying work only when you’re young, exploring your options, and establishing your credibility. Once you become established, become discriminating about your work, colleagues, clients, and associates.

Go where things are changing — or about to change. Quietly but firmly get ahead of that wagon.

I can see humor in almost every situation. It really helps in making decisions and keeping my sanity.

Think twice before joining a family firm — but it is not always a wrong choice.

Be very good at what you do and be good to the people you work with. Honor and respect those who work for you and make your achievements possible.

Keep re-inventing yourself through self-education, because industries change quickly.

Be willing to take risks when a learning experience is worth it. Don’t be afraid to test your skills in an assignment that may be unfamiliar or unpleasant. No matter what adversity may arise, remain focused on achieving your goal of performing to the best of your ability. The rewards will naturally follow. 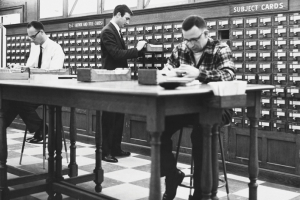 When the HBS Class of 1963 graduated, the World Wide Web and instantaneous access to an incredible wealth of information were still 30 years away. The card catalog, like this one in the Baker Library, was the main tool for indexing knowledge in the pre-Google era.

Make sure you truly know who you are, your strong points and weaknesses. A solid self-assessment is an important step in the right direction. Many of us do not do this to the full extent.

While still a teenager, make a list of all the things you like doing, and those you don’t like. Then find a job or study that maximizes the activities you like and minimizes the others. A happy and fulfilling job should feel like indulging in a hobby. Success is a result of true enjoyment and effort.

As my good friend and author, Richard Leider, says, “Heed your life’s calling — that inner urge to give your gifts away.” This requires being clear about your gifts, values, and passions, and using them as a compass to find your career path. It is an “inside-out” process.

No surprise: Succeeding in business is the polar opposite of winning the lottery (pure luck, no effort). Blood, sweat, tears early on and consistently throughout. Become very knowledgeable about your product, service, or industry, and cultivate lasting relationships with people. Be completely honest in all dealings — even if it’s painful.

Try to find your passion — what you love thinking about and doing. If you can find a career doing something you are already passionate about, the finances will flow, along with a better balance in life.

Dillon House, now the reception center for Harvard Business School, was named after Clarence Dillon, an American financier and philanthropist who graduated from Harvard in 1905.

Pursue your own interests, and not the wishes or desires of someone else. Find a mentor to provide advice and guidance along your career path. Be prepared to relocate geographically to gain a more complete knowledge of your company, and to experience other lifestyles and cultures.

Look for work in areas where you have built-in confidence based on your own experience or preferences. It’s not to say you can’t succeed in areas in which you never thought you had talent, but your shortest path will come through your strengths.

If you like your work, your chances of success will be higher. In the workplace, make your first priority improving your organization, department, or work unit rather than worrying about how the company will help further your own ambitions. Take pride in making everyone better wherever you are. Success takes care of those who create success for others.

Choose a field that you can readily and fully understand. Choose a career path along which the work will be enjoyable — even exciting. Failing to do so will throttle your enthusiasm, commitment, and effort.

Take chances. At 24, I moved to Chicago, where I had never been, and joined a company I previously was unaware of. It turned out to be a terrific move.

For me a fulfilling career consists of sharing the ownership with all employees. I also believe in a very transparent information system so that employees at all levels can judge our successes and failures for themselves. 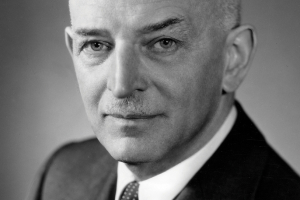 An emigré from France, Georges Doriot became a professor at HBS in 1926.

Justly renowned for his teaching style, Doriot is better known as “the father of venture capitalism” for his founding of the world’s first publicly owned venture capital firm, ARDC.

Look for something you are good at, where accomplishment will be rewarded, which pays well (at least at the higher levels) and gives you the opportunity to work with smart people who will stimulate you and challenge you to grow.

I cannot do better than repeat Joseph Campbell’s admonition: “Follow your bliss.”

Seek work that you love and do it.

Selecting your first job after an MBA graduation is extremely important.  Take the time to determine if that first job will provide lots of opportunity to take advantage of your strengths and interests, and will provide the upside that you are looking for. (A Harvard MBA is a precious commodity, and one should take full advantage of it.)

To greatly enhance the odds of enjoying a career which is both fulfilling and successful, one must find an endeavor, a subject, métier, process, environment for which one has a passion. This could be aviation, geology, medical science, investing, writing fiction, etc.

In my case, it was a love of markets and investing that my father inculcated in me very early on. This passion has led me to often declare, “I have never worked a day in my life.”