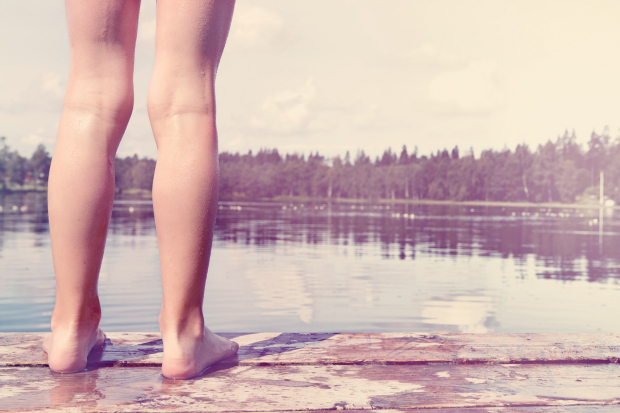 If you knew then what you know now, would you have changed your definition of what success is and what makes you happy?

Since the first issue of the The New Yorker hit the newsstands on February 21, 1925, the magazine’s cartoonists have tackled (and ridiculed) the meaning of life and happiness from mountaintop gurus literally hundreds of times.

The gurus and cartoonists are no closer to an answer today than they were in 1999 when Bruce Eric Kaplan wrote this guru-delivered one-liner: “You do the hokey pokey and your turn yourself around — that’s what it’s all about.”

Defining happiness and success has been just as elusive for graduates from Harvard Business School's Class of 1963. The list of candidates includes good health, doing what you love, being in a happy marriage, raising successful children, and being totally honest.

What didn’t make their lists is, perhaps, even more significant. Not one saw wealth as the mark of a happy and fulfilled life. In fact, one grad took issue with anyone who would put too high a value on financial success, saying, “Those who persist in believing wealth brings happiness are to be pitied.”

Success is when you can spend 90 percent of your time doing the things you want to do and only 10 percent doing things you have to do.  Most people’s lives are just the opposite.

The ability to set goals is very valuable in achieving success. Goals should be balanced in all areas of life — family, social, spiritual, business, health, wealth, education, etc.  The major rules of goal-setting are:

People who have a clear picture of themselves and have set well-rounded goals tend to be much more successful than people who are vague in what they hope to accomplish in the future.

When I entered Harvard Business School, I was staggered by the ability of classmates (especially Ivy-Leaguers) to talk. Everyone seemed trained to be very articulate. In my mind, people were given two ears and one mouth for a reason: one should listen many more times than one should talk.

Active listening requires understanding what you are hearing, asking follow-up questions, and watching body language. The better one listens, the better one learns.

As one ages, it seems that people tend to talk more about themselves and less about the people they are talking to. Listen more and talk less for success.

My definition of success is the same as my father’s was: Be publicly useful and privately happy.

I think about all my blessings and keep an attitude of gratitude. Success is leaving this world better than when I arrived.

Based on my current definition of success, I was not “successful” at age 25. While I had a resume that included many significant accomplishments, I had lost touch with what I now know is essential to finding true happiness. Money, fame, and power are not the essence of either success or happiness. The satisfaction each provides is fleeting and often results in an insatiable need for more.

The only purpose or goal in life that does not lose its value once achieved is love. And since the origin of all love is God, I am speaking as well of faith. With faith and love, of course, follows hope. These three virtues make for a happy life and are the only form of success worth living for.

You are as happy as your saddest child (not my original quote). Put your efforts into raising well-adjusted children. 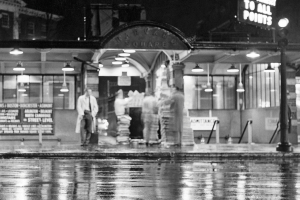 Harvard Square at night, as seen in the 1960s. The rainy streets remind HBS grads that average annual rainfall in the Boston area exceeds 42 inches.

Success is not about the accumulation of wealth and power. It is more about happiness, contentment, and satisfaction — for not only you but also your family.

A great first step in this direction is to avoid “work.” Engage in what you really enjoy doing. Be persistent. If you have a great idea or vision that you really believe in, do not let up — just go for it.

Happiness and success? Knowing who you are. Many people, when asked about themselves, start with saying, “I work for X company.” Then, if faced with a sudden job loss or company closure, they must determine how to define themselves independently of work. Many, if not most, will find themselves in this situation at some point.

If you are comfortable with who you are, have confidence in yourself, and don’t depend on your self-image coming from your job, I think you’ll be happy.

I have been happy. Is that success?

Happiness and success are defined by the importance of:

When I think back over my career, I am struck that my fondest memories are of people rather than experiences, places, or accomplishments.

Success can be fleeting. Don’t let it define you.

Friends and family become increasingly important as you grow older. Make sure you cultivate them when you are young.

Happiness is the best measure of success. 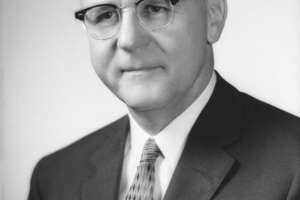 A professor at HBS following World War II, J. Sterling Livingston founded or co-founded a number of leading consulting companies, including the Sterling Institute, which continues to develop leaders and managers to this day.

My definition of success is being where you want to be and doing what you want to do. I regret all the many, many times I did not follow my own advice. If you truly listen to your inner voice, I feel that you will end up doing something very meaningful and worthy of your best efforts. You will benefit not only yourself but also those around you.

Success and wealth are being a lover and being loved.

Success is using your tools and powers to enhance the lives and success of others.

Success is capitalizing on economic opportunities yet treating others with over-reaching kindness.

Success — business and otherwise — comes from setting goals and working steadily toward their achievement.

Be open to opportunities as they develop. Listen carefully, but always keep in mind what you’re trying to achieve and why.

Remember that the world is always changing. Keep asking yourself what changes you must make to keep up with the world.

Be passionate in whatever you do, and focus on the outcomes of your efforts. From that, other things seem to follow: fulfillment, success — however you define it — and perhaps even money. Take time during the process to enjoy yourself and to care about others.

The most successful lives are those people who have had a very positive impact on a great many other people. 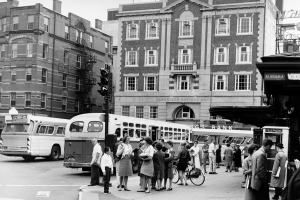 While the Cambridge Savings Bank remains one of the more imposing edifices on Harvard Square in Cambridge, HBS students in 1963 undoubtedly spent much more time around the corner at The Tasty. The 16-stool diner and lunch counter departed the scene in 1997, after 81 years on the square.

A number of years ago, a friend of mine was retiring from a board on which we both served, and I asked, “What are you going to do now, Jim?” He responded: “Happiness is having something to do, something to look forward to, and someone to love.” He was so right, and I am blessed with an abundance of all three.

At age 25, I probably placed a little too much stress on perception as a measure of success. I’ve learned it’s not what others think, but what you think.

Success is being satisfied and having made a positive contribution to one’s community. Have you left it better than you found it?

At 25, I did not realize how important a happy life with a great partner is. I never thought anything would happen to end my first marriage — until it did. I expected our children to follow the same course in life, and have similar abilities and ambitions — most of which turned out not to be true. You must learn to adapt when your expectations are not realized, and take life for what it is and not what you dreamed.

My definition of success:

The important ingredients of happiness are:

I believe that being totally honest in your business is the key to satisfaction and success. Give an honest product or service for your compensation. Avoid greed. Dishonesty will come back to haunt you every time. 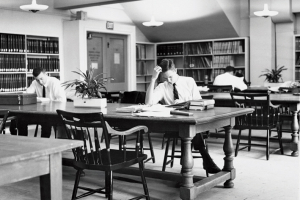 These students are studying in the Baker Library. Founded in March 1908 with a $1,000 gift to acquire its initial holdings, the library is named after George F. Baker, who donated $5 million to build the entire HBS campus.

The important thing is a happy life, and a happy family follows naturally.

A happy marriage, great relationships with family members of all ages, wonderful friends, and enjoying giving back to one’s community are, to me, important successes. Being among the financially successful is nice, but being the most financially successful has fallen down on my list of accomplishments. To live a balanced life is a joy.

At 25, I had no idea how much joy was possible in raising happy, successful children. I did not realize how difficult it would be, either.

Life takes dedication to succeed. Just because someone competes, tries, earns a trophy, or gets a pat on the back merely for participating, as is so common in the younger generations today, that alone does not bring meaningful achievement or earn success. It takes integrity and hard work.

Your opportunities for a “happy and successful life” will not be there forever. Do it now, rather than later.

Do not be deterred from seeking to do the impossible, like applying for acceptance to Harvard with only an “ordinary degree.”