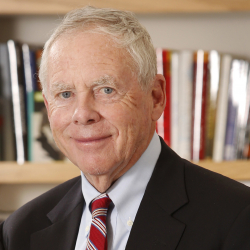 A member of several corporate boards, he is also an avid supporter of civic and educational non-profits, including the Alliance for Education, Seattle Public School Foundation Fund for Excellence, University of Washington Alumni Association, and Partners of ’63.

He underwrote the production of this book after 50 years of assembling class notes from his fellow alumni, feeling that their advice and wisdom deserved a larger audience.

The ability to set goals is very valuable in achieving success. Goals should be balanced in all areas of life — family, social, spiritual, business, health, wealth, education, etc.  The major rules of goal-setting are:

People who have a clear picture of themselves and have set well-rounded goals tend to be much more successful than people who are vague in what they hope to accomplish in the future.

When I entered Harvard Business School, I was staggered by the ability of classmates (especially Ivy-Leaguers) to talk. Everyone seemed trained to be very articulate. In my mind, people were given two ears and one mouth for a reason: one should listen many more times than one should talk.

Active listening requires understanding what you are hearing, asking follow-up questions, and watching body language. The better one listens, the better one learns.

As one ages, it seems that people tend to talk more about themselves and less about the people they are talking to. Listen more and talk less for success.

Serving as class secretary and following 600 alumni over 50 years has taught me to become an “info junkie.” I am also a voracious reader of periodicals of all kinds. All this information leads one to spot trends and look into the future for new trends — sometimes bad and sometimes good.

Travel is another great spur to personal growth. My wife Sue and I have visited 168 countries, and have roughly 40 to go to exceed the number in the United Nations and reach what most consider the more civilized world.

Finally, community participation and giving back are both very helpful in achieving personal growth

All in all, personal growth comes from looking ahead and giving back as much as one possibly can. Keeping track of 600 people for a lifetime was one of the most educations experiences one could ever have.

As people grow older, we spend a great deal of time focusing on anti-aging and finding ways to fend off old age. It’s my belief we should focus more on “aging gracefully.” The following are a few suggestions for how to do so.

Daily exercise is the first thing. The easiest exercise is probably walking. I happen to use tennis and hitting with a tennis pro. Exercise from 45 minutes to an hour every day.

Secondly, you must eat well. The Mediterranean diet of fish, fowl, vegetables, fruits, nuts, and other good fibers is very valuable.

Last but not least, keep your mind active through reading, travel, recreation, and — of course — goals. Having something to look forward to is very critical.