This website — and the companion hardcover book — were underwritten by Arthur W. Buerk, the lifetime class secretary of the Harvard Business School Class of 1963. After 50 years of assembling class notes from his fellow alumni, he believes that their advice and wisdom deserve a larger audience.

It’s Artie’s opinion that life is the greatest teacher. And so he asked his classmates to share what they’ve learned about finding the right career, how to be a great leader, the role of faith and charity, the importance of finding the spouse of a lifetime, and other challenges of their lives after Harvard.

It turns out there are things they don’t teach you at Harvard Business School, and it is his earnest hope that If I Knew Then will fill those gaps. 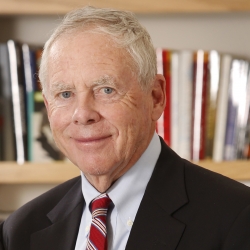 A member of several corporate boards, he is also an avid supporter of civic and educational non-profits, including the Alliance for Education, Seattle Public School Foundation Fund for Excellence, University of Washington Alumni Association, and Partners of  ’63.

He also recently underwrote the creation and operation of the Arthur W. Buerk Center for Entrepreneurship at the University of Washington’s Foster School of Business.